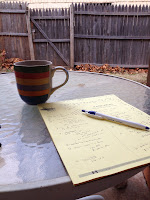 Making plans can be difficult when you are a caregiver. Whether you are taking your loved one out for the afternoon, on a longer trip or going out yourself and leaving a sitter with them, it's a lot of work. There can be so many things that have to be thought out and arranged. And then because there are so many unexpected things that can happen in the caregiving situation, plans can easily be thwarted. Having plans interrupted can be particularly frustrating, especially for those who are not able to get out much to begin with. But it happens all the time.

Philippians 1:6 is a reminder that God never has his plans interrupted. It simply states He who began a good work in you will complete it.  BC (before caregiving) I had dreams and actual plans of traveling internationally. I was headed to Africa in a few short months and had a heart to reach many nations. My plans were dropped when I received word my son was medi-flighted from the scene of an accident. For awhile it remained a source of confusion and anger actually. Why didn't I get to do what God put in my heart?  I worked through some very negative emotions to just be okay with the fact my dreams were not going to happen. My biggest questions came because I thought they were God-given dreams that were never going to happen.

As time went on I found ways to work online. I ended up teaching for three different international English schools and hung a world map over my computer so I could visually connect with where my students were located in the world. I have had students in China,the  Philippines, South Korea, Japan, Brazil, Russia, and Germany. My writing clients have also come from all over the world. I also connected with Christians in Pakistan and have actually taught classes at a school there on more than one occasion via Skype. I started putting pins in my world map to mark the nations I traveled to via the internet. One day I looked up and realized I've "been" a lot of places...the dream did come true -just not exactly the way I had planned for it to.

Caregiving and life in general do not change God's plans. He will do what He said and life can't change it. Of course my big question for Him is Is that all you had planned for my son? But his story is still reaching many lives and they are getting chances to hear his music and read his words so Chris' story is still out there. Even though he can't talk - people are hearing his voice and what his life said. My point? God still has a plan. He never looks up and says Wait. How did that happen. Or I didn't see that coming. He has a plan and it will happen. What He says still goes.

Today I will meditate on the truth that His plans for me were not interrupted by caregiving - they just look different. I will think about how God's plans are solid and done. I will rest today in the fact that I can rest in Him as He brings them to pass in my life; and in my son's life. I will not let the circumstances talk me out of believing everything God has said. I will meditate on His faithfulness today. Will you join me?