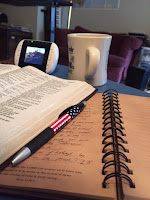 One thing I enjoy is a good book. I miss having the time for reading that I had prior to being thrust into my present situation. But I feel like our lives are enriched by reading so I've tried to make more time for it over the last few months. No Easy Day has been on my reading list for a long time and I finally broke the book open and began reading it not long ago. It's written by a Seal Team Six member and talks a lot about training and missions. One of their mantras is "the only easy day was yesterday."

For many caregivers there are no days off or anything too much to make one day easier than another. There are multiple tasks that have to be done everyday when caring for another person. I had this brief day dream that for my birthday someone would come and tell me to take the day off and go do whatever I wanted to do and they would care for Chris. But it remained a dream - mostly because caregiving really is difficult and there are no easy days.

We are not alone. Many of our Bible characters faced trials and tribulations and had a few very rough days too. Just think about some of our most popular Bible stories. Here's the short list:

This is just a few of the top billings! For the most part, they were already in a tough situation and then something worse happened. However, they all were looking for the promise of God; even in the midst of great trials. Then- their faith took action. When these and many others are listed in our Hall of Faith (Hebrews 11) there is an action after their name.

None of these gave up when the tough going got tougher. They continued on in their faith even when they were told they would face dire consequences for doing so. I love the statement made by the 3 who were thrown into the fire. In Daniel 3:17 - they said our God whom we serve is able to deliver us from the furnace of blazing fire....but even if He does not - let it be known to you O king, that we are not going to serve your gods.... (NASB)

I love that tenacity. They were already in captivity and that was not a pretty picture nor a life anyone would desire. Now they are being told to bow to the gods of their captors or face the fire. They chose the fire rather than idolatry.

As caregivers every day is rough and then there are rougher days. But there is no place to give up on our faith. Even if life gets tougher - or the day gets rougher - we have to say that we will not bow.

Today my meditations will be on how I can preserve my faith. I will think about ways I can protect my heart and strengthen my spirit man so I won't bow in the face of further adversity. I will turn my thoughts toward faith and meditate on this phrase even if not..... I won't give up on faith. Will you join me?