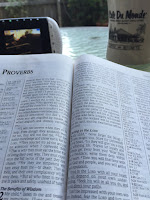 I've been thinking about Joseph a lot over the last few weeks. He was another Bible hero who spent some time not being able to see just what God was doing in his life. It had to be so hurtful and difficult to deal with not only the rejection by his brothers, but being sold into slavery.

If all that weren't bad enough he ends up going to prison for something he didn't do. Honestly, I'm sure somewhere along the way I might have quit. While Joseph's intense struggle isn't described in scripture, we can imagine that he endured heart wrenching agony. And it went on for years.

We read the story of Joseph in a matter of a few minutes sometimes without realizing the impact of the number of years that  passed. He sat in prison. And sat. Then sat. And then sat some more. And the prison he was in was not anything like our prisons today. As harsh of an environment as today's prison are they would be plush and luxurious by comparison.

I have to wonder what he thought about. Did he go over the dreams he'd been given as a young man and wonder if they were going to happen? You know he had to miss his family, but that was nothing new. Did he wonder what his brothers told his dad? Maybe he had dreams that Jakob, his dad was going to find him and come swoop him up and take him back home. I wonder all of this because it sounds like what I would do.

When my son was first injured in the automobile accident and we were sitting for three long weeks in ICU, I kept thinking God was going to swoop in on His white horse and whisk us away. But of course, it didn't happen like that. Instead, like in Joseph's situation, it just kept dragging out year after painful year.

Do you ever wonder how Joseph kept it together over the years? I mean he was in a tough spot that just got tougher but still managed to keep his faith. And it's important to note that he didn't have a Bible to resort to. He couldn't pick up the Bible like we can and go read Psalms for comfort or Proverbs for wisdom. He had far less than we do.  He had nothing.

We know he kept the faith even when he couldn't see by something he told his brothers as it all began to unfold. He said to his brothers that what they meant for evil, God meant for good. (Gen. 50:20) He recognized that even though life came at him, God had  sent him before to prepare the way for his family to be preserved. God's cool like that. He can turn sticky situations into something good. And many times He does it right under our unsuspecting noses.

Joseph kept the faith through some very dark circumstances. God continued to use him to interpret dreams and to share wisdom. As a caregiver it can be easy to feel like we don't have anything to contribute. And quite honestly, people feel sorry for us and don't require a lot out of us. But that's no excuse.God never says never mind. He doesn't take back dreams, calls or visions. Whatever He says about us doesn't change because we become a caregiver. Even though the journey was difficult, God fulfilled what He desired in Joseph's life.

No matter how good or how bad it might look right now - God is still in control. He hasn't forgotten about us. He hasn't changed His mind about us. He is still our God. He is still a loving, caring King who is concerned about everything that concerns us. He remains faithful - even in the midst of the dark stormy night. We can't do a thing to change that about Him! I sure am glad.

Today I will meditate on how God never changes. I'll turn my thoughts to how He continues to watch over us no matter what a day brings - or doesn't bring. I will keep my thoughts focused on how unchanging He is when life around us is in a whirlwind. Nothing scares God. Nothing can make Him give up on us. I will not give up on Him. Will you join me in trusting Him for one more day?