Onward! (Wherever that may be!) 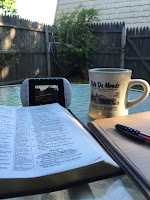 One foot in front of the other. How many times have I used that phrase to explain to people how I "do it"? Something just kicks in and you do what you have to do; and you just keep on doing it. I guess it is moving forward - or going "onward," but it can feel like we are going around in circles. Continuously. Never ending.

It can feel like everyday is the same as the day before with the exact same chores to do. You know the drill. There's bathing, transferring, dressing, feeding, transferring again, laundry, and ton of little chores to do that make the bigger ones easier. Eventually, even the little surprises become part of the routine. You know those things all too well too. There's case managers who forget to order supplies, or can't get the order right....ever, aides that don't show up the day you finally decided to go do something, or nurses trying to cram all her visits in during the last week of the month. Those are just a few of the things that I can think of off the top of my head. It sometimes feels (to me) like we face the giant every day.

David only faced one Goliath, Daniel only visited the lion's den once, it can feel like we face Goliaths and lion's dens every day sometimes. These are just a couple favorite Bible stories we like to share, stories where God made a victor out of a common person. There are other stories demonstrating God's sustaining power too. For instance, Noah only built one ark, but it took him years. Job was only sick one time, but it wasn't just a one day thing; and he never got his kids back. Gideon and Joshua faced battle after battle - there was never just one battle and it was over. Even David spent years running from Saul's spear until he finally became king. And of course there's Joseph who was betrayed by his brothers and spent years in slavery and prison before he ever saw the throne God promised. But all these faithful men walked onward in their faith no matter what they faced. We can too.

We can continue to move forward in our faith even though every day presents obstacles before us. Whether it is the one-time looming giant or sticking with the building of an ark, we can press on into Him. I'm not saying it's always (or ever) easy, but if these guys can hold to the faith in the situations they faced on a daily basis, we can too. Even if we don't see an end in sight. Just like God was there for them in whatever it was they faced, He's here for us too. And that's why we can continue to push onward.

It can be difficult since we can't see how our story ends yet. News flash: they couldn't either. We can read their whole stories in the matter of a few minutes and forget that they walked it out over years. But they held on to faith in Him. All those years in a dark dungeon didn't stop  Joseph from believing. As a matter of fact when he was dying - he told them they were to take his bones with him when they left Egypt. He never gave up hope - even in death.

Today my goal will be to stay focused on Him rather than my situation. My meditations will be on His ever abiding presence that does not leave my faith stranded. I can always trust in Him to keep my soul. I will turn my thoughts to how He continues to walk this walk with me - I don't go onward (wherever that may lead) without Him. We are inseparable. So today I will think about how inseparable God and I are - will you join me?