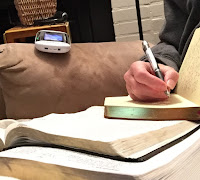 Over the weekend I found myself going through my Yahoo email. I have been neglecting its upkeep and had tons of emails. I decided to go through it and delete the ones that no longer mattered. I did not realize I had emails from as far back as 2005!

I had two or three from my son, which had obviously been sent prior to his accident in 2008. Among them I found a jewel of an email. In it, he thanked me for being a cool mom, and for all I did for him, specifically in his pursuit of God.

Yes, my eyes did sweat just a bit as I read over the words he typed long ago. I read them as if he meant them today. But past that, he made a statement that I shared on Facebook and I can't seem to shake it. He said this: I'm in God's hands and I'm too small to get out.

I've thought about that phrase and even though it is a few short words, it is power-packed. He said so much by saying so little. Since I read it, I've been thinking about it a lot. I think about the fact of being in God's hands - and being okay with that. My life is not in my own hands even though it is largely governed by the decisions I make. I'm in His hand. In my mind, I picture a huge hand... and I'm cradled gently inside.

But it's really the second part I'm too small to get out that my mind can't let go of. It says to me - It is futile for me to try and get out of God's hand. I'm not big enough, strong enough, or smart enough to figure out how to worm away from His grasp. But it also speaks of surrender. If I realize my own humanness and frailty - I'm not going to even try. I surrender to His hand.

To me, it means I surrender to His protection, provision, and power in and over my life. It means I let  Him hold me, I'm not fighting to get away or trying to get out of His grasp anymore. One scripture that comes to mind is Psalm 95:7 and it says We are the people of His pasture and the sheep of His hand. I always thought that was an odd scripture. Shouldn't we be the sheep of His pasture? And the people of His hand? I used to think the psalmist had it backwards. But we are not just sheep out in the pasture - we are in His hand and in His heart.

Psalm 95:6-7 is a song we used to sing back in the day. Come, let us worship and bow down. Let us kneel before the Lord our God our maker. For He is our God, and we are the people of His pasture and the sheep of His hand. Being in God's hand - and realizing we are too small to even try to get out - is not only an act of surrender - but of worship. One of trust. I'm content in His hand - because I do not need to be anywhere else.

Today I am going to think about total surrender to Him. My thoughts will be on trusting Him enough to quit wriggling and squirming around in His hand - and just resting. My efforts will be on finding that place where my soul totally surrenders to Him. And I will be content - and I will rest. Will you join me?