God in the Middle 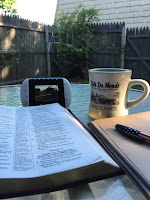 Welcome to Monday! I always chuckle a bit when I hear people fuss about going back to work on Monday or dreading that the weekend is over. For many caregivers, weekends are no different than other days - there's no "evil power" lurking on Monday - it looks just like any other day to most of us. In some ways Monday can be a break for us - aides and other medical professionals get to take their weekends off so our help comes back on Mondays. Sort of reversed I guess.

When I woke up this morning I had what I thought was an odd scripture running around in my head. I even had to look for it a bit - it was though the earth be removed and cast into the midst of the sea. I knew it was in a familiar passage, but it took me a few minutes to locate, before I found it in the middle of Psalm 95.

I can easily quote the first part of this psalm, and run to it quite frequently. It says God is our refuge and strength, a very present help in time of trouble. I love that, especially the very present part. And toward the end of the Psalm is another super familiar verse I have come to love. Be still and know I am God. But for years, I've skipped all the part in the middle - it didn't make sense, especially between these two powerful go-to verses.

Right in the middle is where I found though the earth be removed and cast into the sea. There's a lot of destruction in the middle of this Psalm. We tend to attribute all the psalms to David, and he did write most of them. But I glanced up and saw that this particular Psalm is written by the Sons of Korah. You remember Korah, right?

The story is in Numbers 16. Korah assembled a crowd against God's leaders, Moses and Aaron. Moses said - God can choose between us. The next day Moses said - everyone on God's side stand with us - those with Korah stand with him. And the earth opened up and swallowed Korah's crew.  (verse 32) So the "sons of Korah" who survived, obviously stayed away from Korah and survived. They chose God over family and it was a good thing. So when they  say though the earth be removed they have a good basis for that, they understood it. In verse 8 they said it was God who wrought desolations in the earth. But they also understood that God was with them in the midst of all the "bad stuff" they saw happen.

I think their dedication to God and His purposes were deeper. They understood the glory of God -they had seen it in the wilderness. They understood God as their refuge, as their strength, and the very present help in trouble. But they also saw the God who sent the plagues, delivered the children of Israel, wiped out Pharaoh's army, and did wonders along the way. They understood that in the "middle part" when the earth was eating people, there was still a place with God. There is a river whose streams make glad the city of God.

What I want to walk away with today is that we can know that God in the middle. He's the same when everything is going great, and when everything is not so great. He does not change no matter what we face. He is constant. He is present. He is God. Circumstances do not dictate to Him. And that is my praise point for today.

Today I will turn my thoughts to Him as my ever present help in trouble. My meditations will be on His unchangeable-ness. (new word!) I'll rejoice that He does not sway with my circumstances, or my moods. He's not a moody God. He is sure. He is steadfast. He is mine. And with that I will trust Him for one more day. Will you join me?