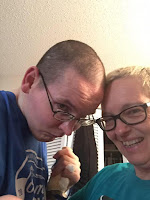 This week, I've been reading the letters Paul wrote to Timothy. There's so much in these two short books, mostly dealing with pastoring the early church. But as I was reading them over again this morning, I found one phrase that stuck out to me.

Paul's talking about how God was faithful to forgive him as he says he was the "foremost sinner" of all. He had persecuted the church, yet God, rich in mercy had pulled him out and called him to ministry. Paul says, the grace of our Lord was more than abundant with the faith and love which is found in Christ Jesus.  Although he felt like he'd been the chief among sinners, he knew he'd received an enormous amount of grace. (Where sin abounds, grace does much more abound.)

But then, Paul says in verse 16 that he found mercy so that God could demonstrate His perfect patience as an example for those who would believe. What an example that was! Maybe some needed that hope - that if God could save Paul - He could save anyone. That got me thinking. If Paul was an example of God's rich grace - what are we examples of?

Today, I'm going to think about the fact that I haven't given up. My meditations will be on all the ways I've seen God move during this trial. I'll turn my thoughts toward His goodness - and thank Him for His patience with me. And I'll be thankful for the journey - as much as I dislike it - it's brought me closer to Him - brought you closer to Him. I'll think about how we are still "in the game" and haven't lost at all. I think I'll crawl up into His lap - tell Him "thank you" and rest in Him. Will you join me?