So I make you uncomfortable? 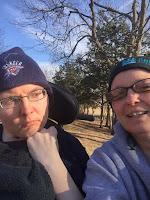 Forgive me for my absence once again but we spent almost all of last week in two different hospitals. I know many of you know that drill! But we are home and I don't doze off every time I sit down now, so maybe I am almost caught up.

I think hospitals are just part of the journey, but I still don't like them. Since my son is nonverbal I feel like I have to be right there every second. This time, my daughter stayed the first couple of nights too so we both got 2-3 hours sleep here and there. Thankfully we are all back home and back to a caregiver's normal.

The home health nurse came by after Chris and I were back home. She asked if family helped. I told her my daughter helped immensely but no one else seemed to care. It's like they get used to it and figure we don't need anything. As caregivers we get used to living in crisis mode. It becomes the norm for us - and the norm for them. She explained it this way.

At first, for us that was Chris' accident 9 years ago, everyone wants to come, even though they can't do anything. But then when it goes on they start trying to avoid because of the internal pain. Then after they avoid us so long, they feel guilty so they avoid us even more to avoid the mixed up emotions and uncomfortableness of the combined guilt and pain.I get that. But I'm still alone.

To be honest (and I usually am) it made me kind of mad beyond the hurt that people avoid my situation so they can avoid their pain. It drives me deeper into that caregiver's cave. I want to withdraw completely, it's easier. But then I started thinking of the flip side. All these scriptures started running through my mind.

Psalm 34:18 says the Lord is near the brokenhearted. He doesn't have an aversion to our pain or loneliness. Psalm 46:1 says He is a present help in time of trouble. He doesn't avoid us - we don't make Him uncomfortable. As a matter of fact, He pulls in closer when we are hurting or rejected.

I am so thankful that He will never avoid us - our lives are not ugly to Him.  Our hearts are beautiful - they look like His. We are full of compassion, just like Him. We are servants just like Jesus - He came to serve not be served. Our situations are never too much for Him. He is near to those who call on Him in truth (Pslam 148:14). He doesn't wring His hands wondering what to do with us now. He draws near. He loves us. He even loves being with us!

Today, I will shift my focus from the loneliness to His faithfulness. My meditations will be on how He longs to be with me - by choice. He does not draw near out of obligation - but because He wants to. And I will give thanks for that today. I'll acknowledge Him in all my tasks today - and rejoice because he ain't going nowhere! Will you join me?