Just Because He Wants To 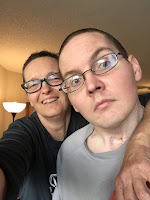 This morning, I was reading in the first chapter of Ephesians. There are so many things God gave us, just because He wants to. This was just what I needed to hear this morning. As caregivers, many of us deal with a great sense of loss. We do not have a normal life. We can feel separated and alone. Personally, I deal with the living grief of losing my son - but still caring for his body. But as I was reading through these verses, I was reminded of the things I do have in Him - things that are not removable. There's no way to lose the things we have through Christ.

In verse four, we were chosen in Him before the foundation of the world. Before He said, Let there be light we were chosen. Why? Just because He wanted to. He chose - that's the key word - chose us. Then it says that we would be holy and blameless before Him. I think that is just wow. He chose us - and then made sure we would be holy and blameless. Now I've been called lots of names in my lifetime, but He calls me "holy" and he calls me "blameless." Just because he wants to!

How do I know? Verse four says that He predestined us to adoption as sons, according to the kind intention of His will - His will? Yes. His "want to." He was so intent on making sure we could get back to Him that He predestined, pre-planned a way for us to get back to Him before He said, Let there be light! That is exciting to me - the fact that He planned to make me (you) holy before Adam even sinned. Before I was born, He decided he would make me holy. Why? Just because He wants to.