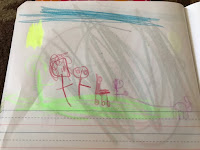 Once again I am sorry for my absence. I pretty much crashed and burned and ended up in that caregiver's fog. Once you're in it, it's so difficult to find your way back out again. This time it was triggered by several things. The funny thing to me is that often it's not the tasks or responsibilities of caregiving that gets me down. Instead, I find it's the more normal things that get to me. This time, it was my son's birthday.

He was 24 when he had the wreck and this year he turned 34. I think all the losses piled up on me, the thoughts of the things he missed. I see his friends marrying, having children, playing music and it wears on me. Plus, he got a couple of phone calls from family and one card. I do get it that he is nonverbal - it's difficult. But his life still matters. He is still here for a reason.

Anyway, it sent me off into a bout with depression and I spent some time trying to crawl out. This last week it broke off of me. I was thinking about some of the power chapters in the Bible. You can probably think of a few. They are just jam-packed with powerfully good stuff. Romans 8 is one of them. It's got verse after verse that you can live on. John 17 is another one. Hebrews 11 too.

I was going through those different chapters one after another and it helped me shift my thinking from my situation and back into line with His thinking. I can so easily get dragged down that road of regret or down the path of discouragement. As caregivers, we don't get tired, we are tired. Oftentimes, there's no one there to pick us up, no one to share that word of encouragement. We have to become like David who encouraged himself in the Lord. But to be totally honest, some days I just don't have it in me to do that. I need someone to pick me up. But I look around and there's no one there. So, it's back to one-foot-in-front-of-the-other just to get through the day.

So, as I was fighting like crazy to get out of the caregiver's fog once again, there was a shift. I was out running and thinking of all those power chapters and walking through them in my head when I was all of a sudden just okay. I can't even explain it. My thought was to only say what He says about me. That is my task for this week.

Today's thought is out of Isaiah 43. Verse 1 says this ...O Israel, the one who formed you says, "Do not be afraid, for I have ransomed you. I have called you by name; you are mine. I am His. You are His. He has not abandoned us to caregiving - He is with it. Even though it seems like no one has room for Chris in their lives anymore - God says Chris is mine. I can take that.

Today, my thoughts will run along the truth that I am His. My son is His. We are His. He has not abandoned us to fend for ourselves but walks through the fire and swims through the flood with us. I will encourage myself today with thoughts that He remains. God is with us when it's foggy and when it's not! (Talking about the caregiver's fog here... ) My meditations will be on His ever-abiding presence. And I'll rest in Him at least for today while the fog has cleared, and I'll trust Him for one more day. Will you join me?