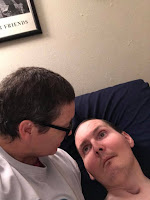 Yesterday, a post by a friend got me to thinking. (That's not unusual, and it's very easy to do.) They stated how they are dealing with a serious condition and how lonely they were feeling. As their condition had progressed and they were sent home from the hospital, visitors waned until they were left all alone to deal with their own emotions and thoughts. Not only do those in these situations have to sort through such a wide range of emotional changes, fears, thoughts, and decisions - on top of all that they are left to deal with the loneliness of being forgotten.

Those on the outside don't always see it that way. They would quickly say, Oh, you're not forgotten. I think of you all the time. I pray for you daily. But this doesn't erase or dilute the sinking alone-ness that the ill or caregivers deal with.

Reading her post reminded me of the day I was informed of my son's wreck. I had to fly from Chicago where I was living to Shreveport, LA where he had been medi-flighted earlier that day. When I finally got there after an all-day ordeal, the ICU waiting room was still full of people. For the three weeks he was in ICU there was a constant flow of people in and out. Once we moved into an isolation room on the regular floor, visitors became fewer. Then even less came when we finally transitioned to a nursing home 4 months later.

After we finally made it "home" (which had to be recreated since I'd been headed to the mission field) there was no one. As if we were fine now. Today, even when we are in the hospital there are few visitors if any at all. It's like everyone thinks you are okay now that the initial crisis or initial diagnosis is over. But that's not really the truth. Caregivers live in crisis mode, we just adjusted - nothing went away.

Since God knows everything, we can assume He knew we would have those times when we feel forgotten, forsaken and all alone. Those times just come as caregivers. It's easy to feel like we have the weight of the world on our shoulders because we sort of do - on behalf of another.

The scripture, When my father and mother forsake me, then the Lord will take care of me is nestled in an interesting passage. I'm going to assume for clarity's sake that he's speaking of when his parents pass away. He precedes the thought with do not hide Your face from me, do not turn Your servant away in anger, You have been my help. Do not leave me or forsake me. What a plea for God's ever abiding presence to remain. Then the acknowledgment that even if his parents forsake him, he knows God has him. He follows it all with teach me Your way O Lord.

I then turned my thoughts to this verse in Isaiah 49:15 God asks the prophet, Can a woman forget her nursing child and have no compassion on the son of her womb? The obvious answer is no. It's not natural to forget or neglect a child. But God follows the question, which He didn't ask just to receive information with Even these may forget, but I will not forget you. What a promise!!

We can feel so easily forgotten, forsaken and like we are having to forge through caregiving on our own. But He sees. He knows. He will never forget or forsake. He draws near and answers our unspoken prayers, fears, cares and cries with a simple I am here.

Today, I will meditate on His nearness, whether I feel Him or not. I'll turn my thoughts away from the crowds who left to the One who stays. I'll be thankful for that and trust Him just for today. Will you join me?