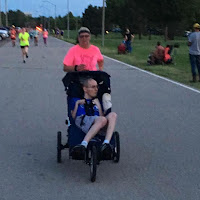 This morning I woke up with a phrase on my mind. It was simply, trust the process. Yesterday's thoughts about Moses and how God delivered and led the Children of Israel out of Egypt and to the promised land one step at a time were racing through my mind.  I thought of how they crossed the Red Sea, needed water and He provided, needed food and He provided and numerous other victories they had along the way.

Jericho also came to mind and I realized they battled on so many levels and in so many arenas to get to their destination. But then I was a bit perplexed as I wondered what in the world would be my destination. I'm not going anywhere. Sometimes it feels like I'm sitting still and life is passing me by and I withdraw further into the caregiver's cave where it is at least perceived as safe. But I don't want to stay there - not really.

And it's at that moment determination arises once again and I resolve to find ways to live outside the box life has tried to enclose me in. It's easier to fade into the cave and live in a little box. There's no fear of being interrupted since most won't venture in. Not even church people. lol

Then this story comes to mind. It's in 2 Samuel 23:20-22. It seems like it was just dropped there by accident. These three verses describe the warrior, Benaiah. He did some mighty heroic acts but I want to focus on one. Verse 20 says he chased a lion into a pit and killed it - on a snowy day. Two things stand out to me, one that he chased the lion into the pit to kill it instead of playing it safe and running the other way. And two, he found his footing on a snowy day and managed to wrangle and kill a lion. He was in a predicament, but he prevailed.

I think of the caregiver - thankfully there are no physical lions in our dens. But we can have some momentous things to deal with. Emotions can rage, finances are slim, friends are few - and that doesn't even cover the stress of actual caregiving. (I could write a book on that one! lol) What I draw from this scripture is that against all odds - Benaiah won. Perhaps it was driven by anger (what did that lion do anyway?). Maybe it was sheer determination. Who knows what he was thinking - but he didn't let it go and he refused to be defeated.

We are faced with a similar choice. We can either be defeated by our circumstances and give up or walk away or chase it down and remove it from the equation. And this is where I am today. I'm staring at this lion of emotional strain, exhaustion, and many other elements that go along with caregiving. Do I choose to succumb and let it just have me and fall apart? Or do I choose to chase it down and defeat it? I'm determined to write a happy ending to my story. So as it all tries to close in on me today I'll stand up and say "Enough!"

Today, I'm going to trust Him for lion-chasing emotion-managing strength. My thoughts will be on how He provides, He loves, He cares for me. I'll follow Paul's advice to Peter (1 Peter 5:7) and I'll cast all my cares, worries and anxieties over on Him and let Him carry them for me. I will pray for Him to show me the lions in my life - and I will chase them down - and I will win!!! Will you join me?