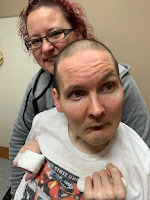 Isn't it funny how you can read the Bible through and still find hidden nuggets? Maybe that's because YOU are in a different spot in life each time you read. I don't know. But I found this verse this morning, even though I'm sure I've read it before.

It's in Micah 4:6-7. God is speaking through the prophet to encourage His people. They were in a bind and He is assuring and comforting them. The NLT reads, I will gather my people who are lame, who have been exiles, filled with grief. They are weak and far from home, but I will make them strong again, a mighty nation. Then I, the Lord, will rule from Jerusalem as their king forever.

As caregivers, we may not be in the exact situation Micah's audience was in, but I think we can relate. Maybe it's just me - I can relate. lol.

One thing that stands out is that God is speaking directly to three types (not sure what other word to use here) of people. The hyper faithers try to make it sound like the world is perfect, all is as it should be, etc. But God is addressing the lame, the exiled, and the grieving. I think parallels can be drawn to caregiving.

The exile. Social isolation is a real concern for caregivers. Many do not have a "social" life at all and for others, it can be limited. It's difficult to maintain relationships when they don't understand why you can't be consistent. They don't comprehend why you have to cancel so often. Eventually, I just stopped trying. It's easy to feel cut off from society, cut off from the rest of the world.

Those filled with grief. Each caregiving situation is different, but there can be many arenas of grief. Some grieve as they shift roles to take care of parents. We grieve as an elderly loved one begins to forget us when suffering from dementia or Alzheimer's.In my situation, I grieve over the son I lost - while I am still taking care of him. Living grief is overwhelming.

The good news is that God doesn't ignore us like so much of the world does. He says - they are weak and far from home - but I'm going to make them strong again. He doesn't give up on us when we feel lame, exiled, or grieve-stricken. Instead, He reaches out His hand to us and gives us strength. he doesn't condemn us - he strengthens us.

Today, I'm going to meditate on how He comes to us when we are weak. I like that, don't you? He doesn't run away because He doesn't know what to do with us. He says - you're weak- I'm strong. I'll be thankful that He doesn't discard us, doesn't look at us with disdain, but simply stretches out His hand to us. I'll take His hand today. Will you join me?