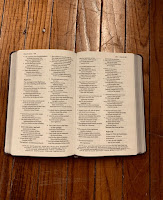 Do you ever have one of those days where it seems like everything sends you off the emotional edge? Sometimes as caregivers it's nearly every day as we tend to live on the edge emotionally. It's called being on overload. We typically live in that state until it becomes the norm for us. There are times when it's worse than others. Little things become huge boulders standing in the way of peace.

Later, sometimes much later, it can seem comical. A shoe coming untied, dropping a fork while trying to eat, or forgetting to push "on" to start the coffee pot are all minor things. But for those of us on overload, it can send us on a downward spiral. For me, sometimes, it's a picture of Chris before his wreck or hearing some of the music he used to write. Maybe finding a handwritten note from him from years ago. What is it for you that cause tears to well up in my eyes and a lump to block your throat? It's not often much.

During those difficult times when emotions are trying to drag us down a path we don't want to go down but don't always have the strength to resist, we stand. But there are times we don't have the strength to fight (or maybe it's just me) and we can quickly feel overwhelmed and overtaken. Then there is frustration on top of all the other bombarding emotions. Here's the good thing - we don't have to muster it up ourselves.

I was reading in Ephesians 6 today and was looking forward to the phrase I remember so well - when you've done all to stand, stand. That's where I felt like I was - doing all I could to just stand. But I found a phrase that lept out to me before I could get there. In verse 10, Paul says this: A final word: Be strong with the Lord's mighty power. (NLT) I was so relieved to not have to figure out where to get the strength to stand and then just stand - it's His power holding me up. It's His power giving me strength. I don't have to go look for a way to be strong - I can totally rely on Him. And that's good on the days I just don't have it.

Today, I will turn my thoughts to how His Spirit lives in me and empowers me to continue to stand. I may not be walking or running or jumping - I can just stand knowing He's got this and He's got me. My meditations will be on the truth that His Spirit is who is holding me up and helping me stand. And I don't have to do anything else but stand - by His power in me.  Will you join me in standing today?