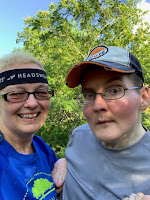 I’ve just come out of a few very rough days. I know you fellow caregivers (and some who are not) really do understand. It can seem like everything is rocking along smoothly when all of a sudden, BAM! Everything falls apart all at once. Our loved one is sick or facing new challenges, supplies don’t come, aids don’t show up or don’t work – whichever, right? For each of our unique situations, there are any number of crazy things that can happen in a day to make our already weird lives even more abnormal. Lol.

Even our easiest days are more difficult than other hardest days, you know? That’s not a complaint at all, just the way it is whether you are an LD caregiver or a full-time in the home caregiver. This last week was a double whammy for me. First, my son was sick (I’m thinking COPD instead of asthma – but haven’t got that confirmed yet.) Then in the middle of it all I get a call about a situation with my aunt. It turned out to not be too serious – but it was a LOT for a day. I was quite literally at my wit’s end.

I have to admit I was pretty upset at God. I felt somewhat like the psalmist in Psalm 13 when he said, how long O Lord? Will You forget me forever? How long will You hide Your face from me? And of course, it didn’t take too long (not forever at least) for the tides to turn again and everything be all worked out for both my son and my aunt. But it was stressful for a few…

It’s so difficult to keep first things first when dealing with tons of stuff going on, isn’t it? I can honestly say – I’m no Job. I’m pretty sure I have “sinned with my mouth.” And after my reading this morning in Genesis, I guess I’m no Noah either. Lol. I’m not too surprised actually.

Noah is so interesting though. First off – God said some really nice things about Noah. He found grace in the eyes of the Lord. (Gen.6:8) Verse 9 says Noah walked with God. That’s an interesting term. Later in that chapter is says that Noah was careful to do all God told him to do. And then in chapter 7, God said that Noah was righteous before Him in a “wicked generation.”

We know that Noah obeyed God and built the ark and then he spent a long time floating around until the rains stopped and the earth dried. Who knows how stir crazy that was, right? At least we’ve got TV! Lol. He was locked up in there caring for all the animals and his few family members. But it was the first thing he did when he opened the door of the ark that got me this morning.

In Genesis 8:19, everything came out of the ark. In verse 20, it says Noah built an altar to the Lord. What if after every really challenging moment, a hard day, or rough situation we built an altar to God in our hearts? What if after those super trying days – or days on end – we kept going back to that altar and declaring we are going to serve God period? That’s how I want to be. Maybe I get tripped up in the particulars. We don’t know if Noah did or not – maybe he cussed out an animal or two! Lol (No hate mail – I’m sure he didn’t.) Did he get frustrated? He was caregiving times 100 with all the animals and his family. He had to get frustrated from time to time. But when he came out – he built an altar.

Today, as I come out from under a super stressful spot – I purpose to build an altar in my heart. I’m renewing my commitment to Him and confirming that I will still “walk with Him.” This altar in my heart will hold all my burdens and I will release them to Him. Just like the smoke went up from Noah’s sacrifice, my woes, pains, and concerns can rise before God as I place them on the altar of my heart and release them to His care. I’ll purpose to stay in that place of worship and sacrifice as I walk through today – will you join me?