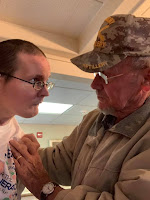 1.30.20 Circumstantial Evidence
Isn’t it funny how no matter how many times you’ve read a story in the Bible, you always see something new? Maybe it’s because we’ve changed, learned new insights, or stumbled over new obstacles since the last time we read it. Perhaps, God just reveals more as we become more ready to receive, or that we are able to see and understand new depths. Who knows?

No matter why it happens, it does. This week I saw something I’d never seen in Exodus 6 and 7. God and Moses are still discussing the great Exodus. It’s the words He used to describe the Children of Israel that got my attention. In Exodus 6:26 He tells Moses to bring out His people according to their armies. Then in chapter 7, verse 4, He says bring My armies and My people. I don’t know if it had ever registered that He called them armies. Maybe I just had read the account in a different translation, but it stood out to me.

The Children of Israel had been bound up under the oppression of the Egyptian rule for 400 years. They looked like slaves, not armies. They acted like slaves, had a slave mentality, and lived like slaves. But God called them armies. Well, of course, my mind went immediately to Judges 6 and the story of Gideon. Remember him? He was hiding from the Midianites when the Angel of the Lord found him and called him a mighty man of valor. Again, he didn’t look like it. He looked scared.

Circumstantial evidence declared the Children of Israel to be slaves and Gideon to be a wimp. But God didn’t see them based on their circumstance, He saw who they really were.

Why does this matter to caregivers? To me? Maybe to you? Caregiving is no easy gig. It can sap us of our strength and in a way, we become a slave to it. Our schedules are subject to the demands of caregiving each day. I know I have had to change my plans LOTS due to a caregiving situation. People tend to stop inviting you to events because you really don’t know until the last minute if it’s a go or not. And sometimes, for some, it’s never a go. That’s not a complaint, it’s just the way it is.

While God definitely sees our situations and understands our complicated lives, He doesn’t judge us based on that. He saw warriors instead of slaves. He saw a leader in Gideon. And He sees Himself in us. The ones often isolated from the rest of society cut off from a normal life. It’s easy for us to feel as though we have been captured by caregiving – even when we do it willingly. But God doesn’t see a slave – He sees Himself. He sees that we continue to trust Him in the adverse circumstances life may have thrown our way.

He sees that warrior side of us! He sees that we continue to trust Him day after difficult day. He sees when we are determined to stay hidden in Him when life’s struggles rip away at our faith. He sees a warrior, not our circumstances.

Today, I will meditate on how He looks past my circumstances and sees me. I’ll think about how He does this on purpose too. He will not judge me on my circumstances but on my heart. When He comes to get me – to get you – He’s coming for a warrior, not a slave. I’ll try to picture that in my mind today as I go about my regular caregiving tasks. He knows we trust Him. My heart overflows with gratitude toward Him and how He sees past the stuff and into my heart. Today, I’ll be thankful – will you join me?