Still in the Boat


Sometimes we don’t realize how heavy the load of caregiving becomes. And other times, we just don’t want to admit it. We love our caregivee – that’s why we do what we do. There are those days we shake off a poor night’s sleep, go into survival mode, roll up our sleeves, and get things done. We can’t not do them, right? 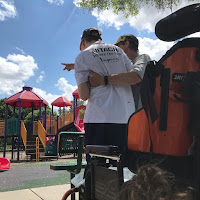 Yesterday, I was feeding my son lunch when a notification popped up on my phone. A group was sharing live worship on Facebook Live. I don’t usually pay too much attention to those things as there isn’t time, but since I was just feeding Chris, I clicked on it. I am so glad I did. The worship was wonderful. Based on the chat there were people from Korea, Uganda, Brazil, and I don’t recall how many other places from around the world. We were joining together to worship the King.

As I began to sing along, the burden I didn’t even know I was carrying was lifted. I didn’t realize I’d been carrying it until the pressure began to lift.

The group began to lead in a song I hadn’t heard before and the words began to wash over me as I heard them singing about how He didn’t forsake me in the storm. The storm came, but He was right there. It was a powerful time of worship and it had touched me so deeply it was still on my mind this morning. Don’t you love it when He meets you where you are? Only He can touch so deeply, so thoroughly, so peacefully.

There are two passages that come to mind. One is in John 6. Jesus’ disciples were in a boat trying to get across the sea when the winds picked up. Jesus came to them – walking on the water. He got in the boat and they were immediately on the other side. Now, when they saw Jesus, it says they were afraid. He met them right there in that fear and said, “It's just Me; don’t be afraid.”

The second passage is in Mark 4. This time, Jesus told His disciples, “Let’s cross to the other side.” Then he laid down in the boat and went to sleep. A storm arose and started tossing them everywhere – and again, they were afraid even though Jesus was right there in the boat with them. They woke Him up and He rebuked the storm with one phrase, “Peace be still.” Then He asked them how it was they were afraid.

Either way, Jesus did not abandon them in the storm. He walked out to them – and they didn’t even request it as far as we know. The storm and wind were raging, it’s doubtful that they called out to Him. He couldn’t hear them in the natural anyway. But He could hear their heart’s cry. Sometimes it’s the silent cry of our heart that rises to reach His heart and He comes to us. He brings us peace. He helps us get through another moment, another day, another situation.

And sometimes, we need to be reminded that even when a storm arises, He is still with us in the boat. He didn’t say it was too rough for Him. He didn’t abandon the disciples; He stayed in the boat and spoke peace. How many times as caregivers have we experienced His voice calming the storm in our hearts or minds? For me, He’s done it time and time again – but He never gets out of the boat.

Today, I will remind myself that He is still in the boat. I’ll turn my thoughts to His ever-abiding presence with me in the midst of the storm. Whether today is smooth sailing or rough going, I’ll trust He is still with me in life’s boat. The storm doesn’t scare Him – and He doesn’t want me to be scared either. My heart will rest today in His peace, I’ll trust Him for it. Will you join me?