Under the Influence of Grief 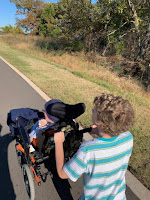 Over the last two days, tragic events in a nearby neighborhood have unfolded. A young man died in a wreck on Sunday. His father, I presume overcome with grief and still in shock, plowed through a group of high school athletes out for an afternoon run the day after. One track star was killed, and five others are in critical condition. There was head trauma involved. Hearing those words always takes me back to memories of my son’s wreck and following experiences.

There is still a lot of unanswered questions such as if he was under the influence of drugs or alcohol. Those tests are pending, but I am relatively sure he was under the influence of grief. And now, these parents of seriously injured teens are on a road at least similar to the one I’ve traveled. I grieve for them as I know they most likely spent the night in an ICU waiting room.

Grief is a funny thing – it’s different for everyone. Many caregivers deal with living grief. For me, I grieve the loss of my son – even though he is technically still here. There was no funeral, no grave, and no closure. It’s ongoing.

As I was thinking about grief, I thought of the scripture that says He bore our griefs and carried our sorrows. I turned to Isaiah 53 and read over that whole chapter. How come we still grieve if He carried them all? Then, I thought of this. He also bore our sins to the cross and paid for them all. They are erased – yet we still sin. How could that be?

He thought enough of us and had compassion enough for us that He took the weight of all our sorrows and griefs with Him to the cross. And yet they still exist, they are real, and they can be debilitating. He understands. Verse 7 says He was oppressed, and He was afflicted. He really does understand the pressure of grief and sorrow as He already walked that road for us. So, He’s dealt with it before it gets to us – He’s been there before us. So, He already made the way for us to work through it. Our grief was so important to Him that He made sure it was in the heaviness He carried to the cross.

Somehow, I find it comforting to know He was concerned about the grief and sorrow we would face in this life. He made it a point to include it in the package deal. Just like sin, it didn’t go away – but He provided a solution. Paul wrote in his intro to the letter to the Corinthians, the God of all comfort, who comforts us in all our tribulation…(2 Corinthians 1:3). He was in the midst of one of the most trying times of his life – and he’s reminding the church that God is the “God of all comfort.”

We are not alone. We are not abandoned in our pain or grief. He was mindful of us and planned for our comfort before we were hurt. Just like He planned for our escape from the power of sin, He also planned our escape from beneath a load of grief. I can take it to Him knowing He understands. Knowing He won’t think I’m being ridiculous, or unreasonable. And He will provide comfort for my soul.