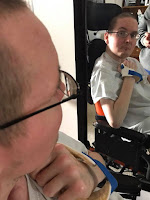 This morning during my private reading and journaling time, I was reading along and just minding my own business. Little things were standing out to me like the fact God had to tell Moses that all the curtains were to use the same measurement. I just found it funny and understood why God didn't have me build it. I'd have one short panel, and none of them would be exactly the same length. lol. It was sort of fun reading all those little particulars as some of it should have been common sense. But God was specific, for sure.

But when I got down to chapter 29, verse 46, I stopped. This verse tells us the why behind God bringing them out of Egypt. It says He brought them out - so He could dwell among them. The whole thing was so He could walk with them. I was humbled that He sent Moses after His people just so He could be with them. His heart is always about pursuing intimacy with His people, isn't it?

My "wow" didn't last long, though. I thought the fact that He brought them out of Egypt so He could be with them, live with them, and walk among them was cool. But then I remembered that at the writing of this verse by Moses - they were sitting in the middle of the wilderness. The dessert for crying out loud. I'm not sure it looked like they thought it should. They celebrated that they were going to go out of Egypt and meet with God. But the reality was setting in by now, I'm sure.

Why would God want to meet us in the middle of the wilderness? Maybe it's an area free from distraction. Or perhaps it was to keep them from being bogged down in the idolatry of Egypt. I had to think about that for a minute or two because oftentimes intimacy with him doesn't come by the route we thought it would. Caregiving, difficulties, struggles, illness, deaths of loved ones, and any other obstacles life throws at us doesn't detour Him from seeking us.

God meets us in those dry times. He meets us in life's wilderness. Sometimes we can see Him more clearly and hear Him more readily when the shackles are gone and so is the world. Sometimes, I've seen caregiving as bondage. But maybe it's just my wilderness - where God wants to dwell among me. Maybe if I could see the spiritual freedom that I've found in the caregiving wilderness, I'll appreciate being free from the bondages of today's religious system. The wilderness has a way of helping us (okay, forcing us) to look at Him.

God said He had brought them out of Egypt so he could dwell among them and be their God. The wilderness has a unique way of shucking us down, doesn't it? But today, I won't shun it, I won't hate it, I won't despise it. Instead, I'll be thankful to be out of Egypt and in a place where God desires to meet me. How about you?