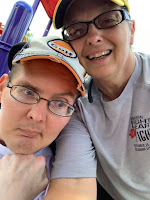 This pandemic hasn't been easy on anyone no matter where you stand on the issue. It's difficult for those on the front lines, without a doubt. It's hard for those who are working, those out of work and those hanging in between in uncertainty. At first, I was a bit amused that so many were having to learn about the social isolation many of us as caregivers are accustomed to. the world responded and it was nice to have access for a brief time to so many Bible studies, teachings, and classes all online. We could finally be a part, right?

But then it seemed to me as if we got pushed further to the back if that was possible. I have to admit I was a little offended but got over it quickly. We've been isolated for years and many of the churches haven't offered an online presence until they needed it. I admit I felt slighted a bit. I translated that as we were not worth the effort. I'm sure no one meant it that way at all - but that's how I interpreted it. And then when we did meet the talk was all about how fast they could get back to their "normal" with no regard for those of us who won't be able to transition back. I felt discarded.

Then, I'm trying to buy common supplies. You know the stuff we need every single month and will continue to need forever once the pandemic has run its course. I needed adult wipes and gloves and they were nowhere to be found. Oh yeah, I'm non-essential. Now I am not minimizing the need of those on the front lines - I do understand that. But I literally cannot find gloves or order them online. This deepened the sense that I am disposable and unimportant in the scheme of things.

My emotions were collapsing and I was being sucked down into the vacuum of despair as if I no longer existed. I struggled with thoughts like I am not important and no one cares. Loneliness swept over my soul until I could not breathe or feel anymore. I honestly hope you don't understand.

Then I thought about David when he came back to Ziklag. He was in that sort of despair. He was battle-worn (can we relate?), he was tired (relate?), then he suffers the loss of his wives and children who have been taken captive, the town has been burned to the ground and to add to his despair - his fellow soldiers blame him for the whole thing. He had to suffer that deep lonely feeling we understand too well.

But David didn't wallow in it like I do. (insert smile) After the men wept until they could weep no more (NLT), it says he encouraged himself in the Lord. Then he prayed. I wonder how he encouraged himself. Did he sing a psalm he wrote? Did he think back to the ways God had blessed him in the past? I wish I had more details. But I know where I can start.

First, I will find something to be grateful for and I'll thank God for as many things tangible and intangible that I can think of. I'll start with grace, His love, and salvation and build out from there. While I already feel better, I will continue to build on that foundation. Then, I will praise God because my lowly circumstances do not change Him one iota. Not one thing shifted in His kingdom when the bottom fell out of my world. I'll put my focus on the things about God that do not change. That will be my praise and my meditation today. Will you join me?