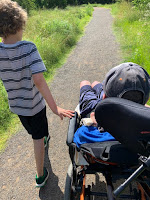 This morning I found myself reading in Ezekiel. Although I love the OT prophets and read them often, I must admit I had no inspiration and my Bible literally opened to it and I began reading. I am so glad I did. God was warning the people of Israel and giving Ezekiel a rundown on the true state of their hearts in chapter 33. Then He begins to talk about the shepherds who were supposed to be caring for the sheep but were instead taking care of their own needs and scattering the sheep. Even some of the sheep were being inconsiderate and unkind to other sheep.

God was not too happy with the "fat sheep" who had gotten that way by pushing other sheep out of the way. They crowded their way to a "blessing." He said He would judge between the sheep and the shepherd as well as between sheep and other sheep. Why? He's the seeker.

So for the sheep suffering from neglect from the shepherds and bullying of other sheep - God said He would step in. He said He'd make sure they were no longer a prey - that they had what they needed. And Ezekial ends chapter 34 with this: you are my flock, the sheep of my pasture. You are my people, and I am your God.

There's no mention of them seeking God during their struggles. Ezekiel said nothing about them crying out in their pain, or praying for deliverance. They may have - I know I have! But what I saw in this was God seeing the need, seeing the hurting, seeing the hungry, seeing the whole picture, and then seeking out His own.

As caregivers, we can be operating under a load others simply do not understand and many just don't want to see. Life gets ugly sometimes and doesn't go as planned. But God continues to seek His own. He will seek for us until He finds us. Then He provides peace, comfort, sustenance, and acceptance.

While we understand we are rewarded with His presence when we seek Him - in this scenario He becomes the seeker - and He's looking for US! Jeremiah says when we seek Him - He will be found by us. Can we do the same? Can we let Him find us in our pain, in our aloneness, in the darkest emotional cave of our lives? He wants us. He is looking for us. And He won't stop until He finds us.

Today, I purpose to be found by Him. I'll step out of the dark recesses of the cave I've been hiding in and I'll let Him see the ugly of life. I'll let Him see my tear-stained face and bloody torn heart. I'll rest in His arms as He bandages the wounds, wipes the tears from my face, and holds me close to His heart. Will you join me? He's looking for us.