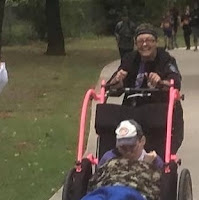 Unless I am talking to other caregivers, I don't often share the things I am going through. Unless it's a road they have walked, they won't be able to understand where I'm coming from. Often, we are met with empty stares when others hear about our "normal" days. Without really understanding, I've even had comments about why I choose to take care of my son. Even though those types of things are hurtful, I know they come from those who have no idea of how love can compel us to do the hard things. And that's okay.

With that being said - we know how hard it is to provide care and make decisions for another person. We can feel alone especially when there is no one to help us make those decisions. Oftentimes, I feel like people look the other way so they don't have to process how difficult life can be for caregivers. And sometimes, it feels like God looks the other way too.

Does He really know the day-to-day struggle? While I am sure that He does - and that he "gets" it better than anyone, the struggle is real. These are some of my thoughts from my morning devotions. I was reminded of Psalm 57:1 and the last part of the verse that says In the shadow of Your wings I will make my refuge until these calamities have passed by. I thought of the psalmist's resolve.

Soon though, David turned his prayers around to declarations. He declared four I wills in verse 7-9. I will sing. I will awaken the dawn. I will praise You, Lord. I will sing...

But you see, I had just read Psalm 13, also written by David. He starts out this psalm by asking how long God is going to forget him. But guess how he ended it? The same way! In verse 6, he says, I will sing to the Lord. While I was enamored by his resolve in both of the psalms, I also realized they represent two different times in his life when he felt overwhelmed, defeated, out of control, etc.

Both times he poured his heart out in transparent honesty before God. He was open and real with how he felt. And both times he ended with declarations. I will sing. David had a consistent resolve that no matter how difficult life or what new circumstances were presented, or how difficult the obstacles became He would trust God. I like that.

Today, I will turn my meditations away from my situation and difficulties and I resolve to praise God in this storm My heart will trust in His shadows until calamity has passed. My thoughts will be on His faithfulness and how He carries me so much of the journey. So, I will trust Him with one more day. will you join me?