It's All the Same to Me 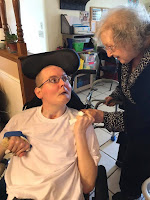 My thoughts were scattered this morning during my devotions until I finally settled into reading a few more chapters in Isaiah. It wasn't a bad thing, really. I was trying to prepare for my devotions for Facebook live - and had too many to choose from. lol. That's one of the most amazing things about God and His word. No matter what I am dealing with or going through, He has me covered.

His Word renews my mind (the reason it's so important to read it!), He has my heart in His, and He keeps my soul. (Psalm 121:7) He really is our All in All. He's got us covered from one end to the other and throughout all eternity. Think about it a bit. He knew man would fall. So He planned a way for us to get back to Him before He said, Let there be light. He made sure we would never be at a spot in time where we would be separated from Him.

Even now He has everything under control even when we feel out of control. Just His armor alone has us covered. (Pun intended.) Of course, it's up to us to put it on. But when we put it on and purposefully keep it on then we can stand against all the wiles of the enemy. Every fiery dart he throws at our soul can be quenched and destroyed by the armor.

The cool thing is that the armor is the same for everybody. There's no special armor for the caregiver or the pastor, for the teacher or the homeless, for the rich or the poor. The armor is available for all believers. There are no exclusionary statements attached. It doesn't say - Christians, put this on - unless you are a caregiver - then you are out of luck. His grace doesn't run out when we become caregivers. It actually abounds more. Society likes to condemn, discard, and ignore those who don't fit the status quo. And so does the worldly church in general.

But let's take a look at God's heart for us. I think I found it in Isaiah 10 when I was reading this morning. It may seem disconnected but bear with me. It says:

Woe to those who decree unrighteous decrees

who write misfortune, which they have prescribed

to rob the needy of justice

that widows may be their prey and that they can rob the fatherless.

As I read over these two or three times this morning, I heard God's heart in it. God doesn't like injustice. He doesn't like robbery in any form. His heart is for the needy (and boy do I need Him!) and the poor. He reaches out to those who are looked down on and discarded by society and the religious system. When Jesus walked among men on the earth, He always went for the sheep who were cut off, those no one else wanted. Zacchaeus the tax collector. Mary Magdeline the woman that Jesus cast seven demons out of - she became a great evangelist. He always had time for the downcast and weary.

God's heart toward caregivers is one of compassion, grace, and mercy. He defends us. He loves us no more - and no less than others. We are part of His team and His hand is always reaching out toward us longing to draw us into His heart.

Today, I will be thankful that He reaches a little further down into life's trenches to grab me. My thoughts will be on how His heart is chasing after those the world tends to discard. I will be thankful that He walks into life's ugliest pictures and paints grace. I'll rest in that thought today as I trust Him for just one more day. Will you join me?

If you have a chance, check out my books on Amazon. I'm adding more soon both in Kindle and hardcopy! They are also available in ebook form to read on your phone or tablet. You can get those on my main website, Dove's Fire Ministries Education.