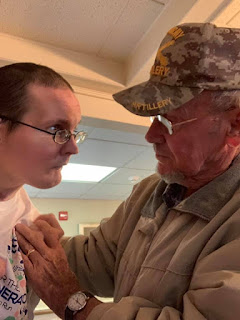 I found myself in a very familiar story this morning as I was preparing for live devotions on Facebook. It's in Matthew 14:22-33. We know this story as the time Jesus came walking on the water. It's also familiar because Peter jumped out of the boat and walked on the water to get to Jesus. Have you ever been in a place where it felt like it would take a miracle for you to get to God?

There were several things that stood out in this story. I hope you take a minute to read it again today. I like that Jesus took time for solitude and prayer. What an example for us. If He needed it - we certainly do!

I like that Jesus stepped out into the storm to get to his weary, frightened disciples who were still trying to row the boat. (That's us - huh?) They were frightened at first. But then they recognized Him. He told them to not be afraid. They knew His voice because He simply said, I am here. (NLT)

Then Peter who is known to be a bit impulsive calls out. He said, If it's really You - tell me to come to You by walking on the water. (NLT) Now I've read this story numerous times as many of us have. But this morning I stopped to think about Peter's inquiry. Why didn't he just jump out of the boat and take off? His question seems to indicate to me that he really wanted to. What held him back?

If it's really You - Peter said. Did he doubt? If he doubted why in the world would he have trusted this voice in the night? What if it wasn't Jesus? A deceiver or imposter could bid him to jump out of the boat to his doom. Right?

As caregivers, our days and nights can get rocky. We can be tossed around on life's sea like a boat in a storm. But we keep rowing just like the disciples did. It doesn't say they were waiting for or expecting Jesus to come to them. But He came. He walked right into the middle of their dark night; right into the middle of their storm and gave them permission to believe Him. I like that.

Today, I will take a good look at my own faith. I'll ask myself some hard questions too. Do I believe? Would I jump out of the boat and run to Him? Will I accept Him in the middle of the dark night of the soul? Will I trust Him to calm the storm? Yes. Yes. Yes. and Yes. Will you join me today?

If you enjoy my devotions, check out my devotionals on Amazon. They are available for just $5 and you can get them in print form or on Kindle for the same low price.