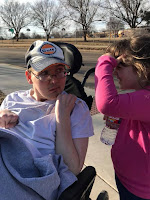 This morning in my devotions I found myself in Psalm 57. It's a passage very familiar to me and dear to my heart. When I was sick with a mystery illness back in 1986-7, I read this psalm over and over as I literally held onto it for dear life. It's got all the elements: prayer, praise, despair, faith, and declarations.

This particular psalm is written by David, the same David who ran toward Goliath and declared that God would deliver the giant into his hands that very day. But now, he's running from a mad man, Saul. David is hiding in a cave. That's a far cry from chasing down a giant, right?

He's open and honest about his distress. In verses four and six he says,

Man, can I relate to that! Many times I feel surrounded by enemies like fear and doubt. It takes a lot of courage and strength to just keep putting one foot in front of the other. The cool thing about David though, is that he always brings in faith. In verses two, three, and seven he says:
It's kind of like his own little pep talk. Have you ever had one of those? :-) Mixed in these few verses, as was his custom - he takes time for praise. In two verses, five and 11, David praises God by saying, Be exalted O God above the heavens, May Your glory shine over all the earth. David was also a man of action and he said in the first couple of verses: I look to You for protection! And I cry out to God Most High.
I'm telling you, this psalm has it all! Since I've been meditating on declarations over the last few weeks, you know I have to pull those out of this psalm too. David makes four powerful declarations. Even though he is in distress, he is surrounded by his enemies, he's hiding in a cave for fear of his life. He still declares in the midst of his struggles:
And that's where I'll leave you today. What are your declarations today? Can you look your "enemies" (doubt, fear, etc) in the face and declare - Today I will hide in Your shadow O Lord...all day long. Today, Lord I will sing to you, I will thank You, Lord.

Get your "I Will Declarations from Psalm" ebook for $1! It's at my Dove's Fire Ministries eBookstore.