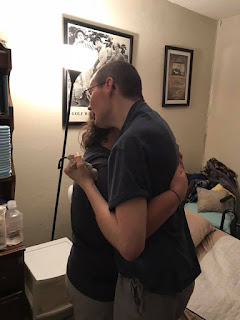 I don't want to brag, but I can go from I'm okay, I've got this to the depths of emotional despair on a dime. Is that just me? The day is rocking along. I'm in control. I've got it, getting things done. And then Bam! Out of seemingly nowhere a thought, a photo, a song, a memory, a whatever else - snaps my emotions in two. I'm wiping tears from my eyes, thankful for the memory, but wondering why.
I have a feeling it is very common among caregivers. Even though our journeys tend to be widely different, they often lead us along similar emotional paths. We are good one minute and not - the next.
That's why I love His grace so much. In 2 Corinthians 12, Paul was whining. Don't tell them I said so, but apostles seem to be a whiney lot. (LOL - lighten up!) He did not like what he was going through. As a matter of fact, he admitted to asking God three times to remove it from him. God did not.
Paul begged God to remove his "thorn in the flesh" - his discomfort, his emotional pain, his bondage. While Paul didn't get the answer he wanted, he did get an answer. God explained, My grace is sufficient. What a loaded statement! Right?
If I'm honest, there are some days (not too many of them really) that I just don't like caregiving. I would enjoy the freedom of heading out for a hike or just the ability to jump and run to the store if I need to. I've forgotten what it's like to call a friend and see if they wanna grab a cup of coffee or a quick meal. Most days - I'm good with it. I've adjusted. I don't "need" all that. But every once in a while normal raises its head and longs to be a part of my day. Those days, I need a bit more grace. I'm more prone to tears and battle depression a bit more on those types of days. Do you? Maybe it's just me.
No matter what a day piles on our (already full) plates, God's grace is enough to match it. I imagine it a bit like an old cowboy poker game. Someone raises the bid - the stakes of the game. Everyone has the choice of folding - or staying in the game. But instead of us making the choice - when life raises the ante - God says - I see that and I'll raise you two more. No matter what kind of hand we are given on any given day - His grace covers the stakes. I like that. There's a bit of comfort in that - knowing that the stakes can't be raised so high that He folds or gives up. He just keeps covering it all with His grace.
Today, I will make His grace my meditation. Hebrews 4:16 in the New Living Translation says when we come boldly to His throne of mercy - we find grace to help in time of need. I'm going to lean in to Him a bit more today and let (that's a BIG action word) - His grace cover and carry me. Will you join me?

Check out my bookstores. I have eBook devotionals, Bible study guides, poetry, and more in my Dove's Fire Ministries bookstore. My Amazon bookshelf has a couple of those in print or on Kindle.