The Big Stuff vs The Little Stuff 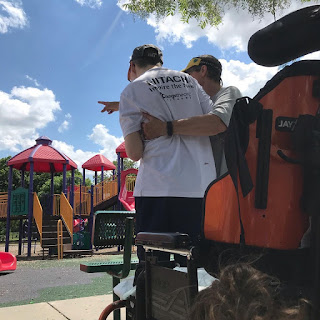 It's an understatement to say that caregivers have a lot on their plates. That may produce an interesting image, but it doesn't touch the surface. I used to think that long-distance caregivers had it easy. That was until I became one - lol. Of course, that was in addition to taking care of my son full time. Smh. It's just not easy to take care of another whole person, no matter what level of care that requires.
Sometimes it seems like it's the little stuff that gets us. You know? I don't know- maybe it's all "big stuff" when you're a caregiver. Sometimes it's easier to trust Him with the big stuff. We have so many examples in scripture. Gideon fought off an innumerable army with just 300 men. Joshua and the Children of Israel marched around Jericho and the walls fell down. Moses led them across the Red Sea on dry ground. But those small things can eat our proverbial lunch.
It seems easier to ask God for strength for dealing with a brain injury, aging, cancer, or other health problems and situations we must deal with than it does when all the little things crumble around us. I can think I'm fine and pick up a pen to write something down and find it doesn't work. You'd think my world revolved around that writing utensil and it's all over just because it's not available when I need it. Or let me drop a chunk of cheese on the floor while I'm preparing a meal and you'd think WWIII had started in my kitchen. lol. Can you relate? Or is it just me?
Somehow, it seems easier to hand off the big stuff to God but keep the small stuff to deal with on our own. But I'm learning that His shoulders and heart are big enough to carry it all. And what's even more important to me - is that He wants to. We can go largely ignored. Not because people don't care - but they really don't know how to act or react to our situations. It's not their fault - they just don't know what to say or do and since they don't want to do or say something wrong - we are ignored.
We need more of Job's friends - as horrible as they were to him - when he needed them most they came to him. They sat in silence for 7 days because they simply didn't know what to say. (They should have stayed silent. lol) But they sat and sat and sat, and said nothing. However, they chose to participate in his pain. My friend Mary did that. When Chris first had the wreck she flew in from Indiana and stayed with me for almost a week. She stayed in the hospital room with us and was just there for me. It meant the world. It wasn't anything she said - she was just there - in the big stuff with me and God.
Today, I'm going to take a look around at big stuff and little stuff alike. I'll do a personal assessment to see what there may be that I have not deemed worthy of His attention. While my plate may still be "full" I know He will be shouldering some of the weight - the more I can give Him the better, right? Will you join me today in giving Him all - and trusting Him for one more day?

Check out my bookstores. I have eBook devotionals, Bible study guides, poetry, and more in my Dove's Fire Ministries bookstore. My Amazon bookshelf has a couple of those in print or on Kindle.