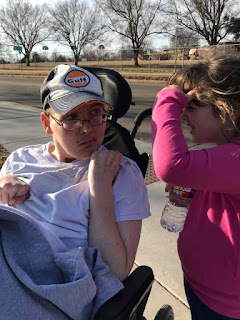 Do you ever feel alone? Caregiving has a way of isolating you and sometimes even in a crowd you can feel alone. Since I've become my son's aide, I feel more alone than ever. I know I am on the phone with people or in zoom meetings almost every day. But I still feel so very alone.

I remind myself that God is with me - a truth I hold on to. But it's so hard to not feel totally alone when you make all the decisions, do all the caregiving tasks, and can't find sitters for big events you really don't want to miss. I know that He said He'd be with me to the end. He also said He'd never leave or forsake us, but since God doesn't wear skin, it can feel like He's a million miles away from my day-to-day reality, no matter how much my heart holds to the truth that He is near.

Ah! The age-old battle between the mind and the spirit.

I started mentally walking through some Bible stories to find a character who may have felt very alone, yet God was with him. I landed on David. There he stood facing a giant, a foe of epic proportions like none other he'd ever faced. It was just him and Goliath. Was David alone? Nope. But certainly, he must have felt that way, right?

Saul tried to give David his armor and wasn't confident in sending "the kid" out to the battlefield. David had been talking among the ranks and asking soldiers what the prize was for defeating the giant. He didn't seem to ever think about any other scenarios - other than victory. His own brother tried to belittle him by asking where are those few little sheep you are supposed to be taking care of? This brother surely had seen Samuel anoint David as king, but refused to accept it and instead tried to make sure David knew he was the least, the youngest, the most unimportant piece in life's puzzle. So even though David had all of Saul's army present and "behind" him, he faced Goliath all alone. And that's where God showed up.

David must have looked and felt so small standing there in front of Goliath. He was likely shorter than the giant's staff. But David had told Saul that God had delivered him from the lion and the bear and he had no doubt God would deliver him from the giant too. So there stood little David all alone. Facing the giant and an army of frightened soldiers behind him - but not with him. But he trusted God and prevailed.

I propose today that even though we may feel sandwiched between a giant and our past God is with us on that field. We may hear the naysayers. We may not have any physical help. But God is showing up for us again and again. As caregivers, we face more than just one giant every single day. As a matter of fact, sometimes the smallest parts of life become huge giants because of our situations. But we can face them all in the name of the Lord.

Today, I will remind myself that I am not alone - no matter how alone I feel. I will tell myself to grab hold of those proverbial bootstraps and give it one more go. My thoughts will be directed toward the truth that God is with us - we never face the giants alone. I know I can trust Him to empower me to take them out one by one. So, I will trust Him with the giants of today. Will you join me?

Check out my bookstores. I have eBook devotionals, Bible study guides, poetry, and more in my Dove's Fire Ministries bookstore. My Amazon bookshelf has a couple of those in print or on Kindle. My devotional 31 Days in Psalm 31 is all about seeking God from the cave! Check it out!