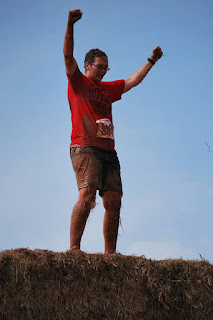 Do you ever just read along in your Bible and have a phrase just jump off the page at you? That happened to me this morning. I was reading in Ephesians 6 about the armor of God. Paul said to put it on. In verse 13, Paul tells the believers to Use every piece of God's armor to resist the enemy in the time of evil so that after the battle, you will still be standing firm. (NLT) I've probably read this passage 100 times or more. I've taught from it, studied it, and meditated on it. But those three words leaped off the page as I read through it once again.

After. I sometimes wish this verse read that if we put on all of God's armor, we can avoid the battle. lol. You know that passage where Jesus tells Peter that the enemy desired to sift him like wheat? (Luke 22). What did Jesus go on to tell Peter? But I have prayed for you. Jesus goes on to say He prayed for Peter that his faith wouldn't fail  - and that after he repents and is restored, he would go on to strengthen the brethren. Notice that Jesus didn't pray that Peter wouldn't go through the test - but He prayed concerning him after the test. He prayed that Peter's faith would not fail, not that he could escape the battle.

This word after is looking huge right now! Sometimes our days are filled with fights. That makes for a lot of afters. Our emotions war at us. Some of us fight feelings of abandonment and loneliness. Many caregivers deal with living grief. No one will argue the point that caregiving is tough. There are no easy days. lol. Even though we are not promised that there will be battles, we do know that there are many afters.

After He's carried us through another dark valley. After our loved one is released from the hospital. I'm sure you've got a long list of afters since caregiving is so personal and unique for each individual. But we are all still standing. We are still seeking Him. Before, during, and after each battle. There's no doubt that He carries us through the battles common to caregiving. I'm so glad He does!

Today, I'll remind myself that there are lots of afters to look back on. That means there are plenty of battles won. So, today I'll shift my focus from the present battles and take a look back at some that He's already brought me through. I'll thank Him for the emotional wins, the financial wins, the relationship wins, the mental wins, spiritual wins, and any other win I can encourage my heart with today! I'll remind myself that we always triumph in Him, even if we are not exempt from the battle! Well, with no battle - there's no win. :-) I'll thank Him for the battle because I know there's an after. Will you join me?

CLOSING DOWN THE DFM BOOKSTORE.
After much thought and prayer - It looks like I will be closing down my bookstore. My criteria for keeping it open have been that it pays for itself. I will likely keep it open for a few more weeks and then will shut it down. I'll continue to make books available through Amazon. But  Dove's Fire Ministries Bookstore is likely to close soon - grab anything you're interested in before then, especially the smaller books and study guides. They will not be available on Amazon.