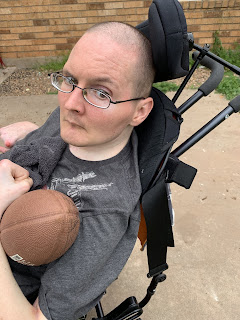 Since yesterday, I've been thinking about some things I shared here and in the FB live devotion I did. My thoughts were on how nothing surprises God. You'll never hear Him say, "I did not see that coming." Instead, God already has a plan for anything and everything we face. As I shared yesterday, He had already planned the way through the wilderness for His people before He went to Egypt to get them. Nothing took Him by surprise. Not the Red Sea, Pharoah's army, the lack of food or water, giants in the land... nothing was a surprise, and His provision was already planned.
I've tried to bring those thoughts into my caregiving situation. Maybe God doesn't keep things from happening to us - but He's already got the provision ready to go for the journey. God didn't prevent Joseph from being sold into slavery. He didn't keep Daniel from sitting all night in a lion's den. God didn't shackle Goliath so David wouldn't have to face him. That list could go on and on, right?
I propose that God doesn't always prevent things from happening - but makes the way through it - before it occurs. He can do that since He can see all of time all at one time. He's not living second by second like we are - He's already marched through time, so we just need to follow in His footsteps to get to the other side.
In Psalm 68, the NLT says O God, when you led your people from Egypt, when you marched through the wilderness....In my mind, that looks like God marching beforehand (since He's not bound by time) and making the way. I was really excited to find this verse this morning. But what really got me was a couple of verses before that. In verses 5 and 6, it says, Father to the fatherless, defender of widows, this is God whose dwelling is holy. God places the lonely in families... He has a place for the lonely, and He's already got it all set up - before we even realize our own loneliness.
I believe God's place holds the lonely. His space houses those cast away or rejected. We all have a place in Him, and no one seeking Him will be denied. I love how He can make all the provisions for us - before the "stuff" even happens! That blows my mind.
Today, I'll look for His footprints in the wilderness. When I find them, I'll just put my foot where His foot has already been. Instead of wandering around like a chicken with its head cut off - I'll trust His steps each step of the way. I'll just follow His lead - and trust Him to take care of the rest. Will you join me?