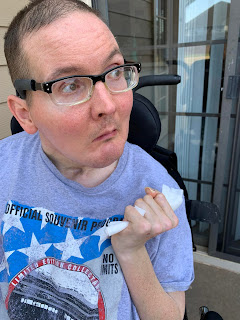 I know that we will never figure out God's plans; we are not supposed to. But there are so many things that leave me scratching my head in wonder. Since yesterday, I've been thinking about the people in the Bible who faced adversity. I noted, first off, that there is no one anywhere in the Bible who did not face some sort of trouble. But this morning, my mind landed on the Children of Israel and their journey out of bondage into freedom. It was not an easy plight.

You know, God could have just picked them up and translated or transported them from Egypt to Cannan. No journey. No losses. No worries. No miracles...

He didn't use what we might think would be the easy way. Instead, He took them through the wilderness to the promised land. Their own obstinance and lack of trust made their journey a lot longer than it could have been. But here's the thing. God had a plan. He didn't bring them out and up to the banks of the Red Sea and then try to figure out what He was going to do. He knew the route, the bumps along the way, and the obstacles they would face, both in the natural and in their own heart.

I was sharing some of this in my FaceBook Live devotions this morning, and I had an epiphany. God has a plan. He knew how He was going to get the Children of Israel to the fulfillment of His promises. He wasn't sitting on His throne trying to figure out what to do. They faced one peril after another - and God always came through. Instead of this picture of Him sitting on His throne wringing His hands, worrying about what might or might not happen next, I saw Him excited. It's more likely that He's leaning way over heaven's portals and eagerly waiting for the next part.

He knew they would run out of food - so He planned for the manna. It wasn't a surprise for Him. He knew they'd have no water - so He planned to provide water out of the rock. I guess I've always viewed Him as just waiting for things to crash and then doing something. But instead, He's excited. In my imagination, I see Him saying, "I can't wait for this next part!" Because He already has the answer planned.