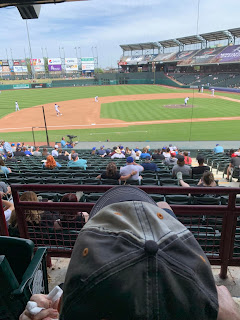 I took Chris to our local minor league baseball team's game yesterday. I must say I give the ballpark an A+ on accessibility. The parking guys pointed me to a handicap spot right near the gate. And from there, I just rolled him in and found our accessible seating - which just means a chair beside an empty spot for the wheelchair to fit in! It was great. He could see fine and even though it was a bit loud at times - it wasn't too loud for him. What joy fills my heart when I find things to do that are positive.

As we sat and watched the game, we became part of the crowd. We were all watching the game and cheering on the home team. We had one purpose - besides being entertained, and that was to support the local team. We all cheered when our guys made a play. We hooped and hollered when one of them stole a base or hit a home run. It was so amazing to be part of something bigger than us - to be part of the community.

It made me think about the crowds who followed Jesus and the woman who pressed past the crowds to touch Him. Her intense need for Him separated her from the crowd. Jesus even asked the disciples, who touched me? They must have thought He was joking because the crowds were pressing in on Him - but she touched Him in a way no one else did. She reached out and touched just His garment with her hand - but touched His heart with her faith. (Luke 8:40-48)

As I sat and was overjoyed at being part of the crowd yesterday, I knew we still stood out. We don't look like everyone else. And although everyone was gracious and greeted us kindly, there were blank stares and unspoken questions everywhere. I don't mind being part of the crowd - I don't even mind standing out from the crowd as different. But the main way I'd like to be different is in my intense need for Him.

This woman pressed through a crowd much bigger and closer together than our socially distant crowd yesterday. She knew she needed something more and even though she was just part of the crowd, she reached past the crowd and grabbed what she needed. The crowd couldn't satisfy her need for Him. The crowd didn't have her answers. The people didn't even understand her intense need to touch Him - but she pressed in any way. And she is the one who touched His heart.

Today, I don't care how crowded life is with caregiving responsibilities, workloads, phone calls, and day-to-day chores. I want to press past all that and touch His heart. Why? Because that's where peace dwells. That's where grace and mercy are ready to help in our times of need. That's where our true emotional healing rests. So, today I hope even if just for a moment, I can press through the crowded day and reach out to touch His heart. I'll be content with that  - won't you?

Check out my bookstores! Downloadable eBooks are on my DFM website. Print and Kindle versions of a few of them are available on Amazon.